Mirror mirror on the wall, who's the fairest package manager of them all?

Let's face it … all the people reading this article do not agree on everything, and the greatest package manager is the one that annoys you the least this month.

I recently found myself having to re-install and set up my dev environment from scratch on a new 2020 Apple Macbook Pro with the new Apple M1 chip. This means Vim plugins, Jetbrains IDE's, programming languages, plugins, more plugins, another 100 extensions I didn't know I was using, and so on and so forth.

NOTE: The new M1 chip won't run older packages or programming languages out of the box. So if you are thinking of buying a Mac with an M1 chip, expect to go through some suffering during setup. 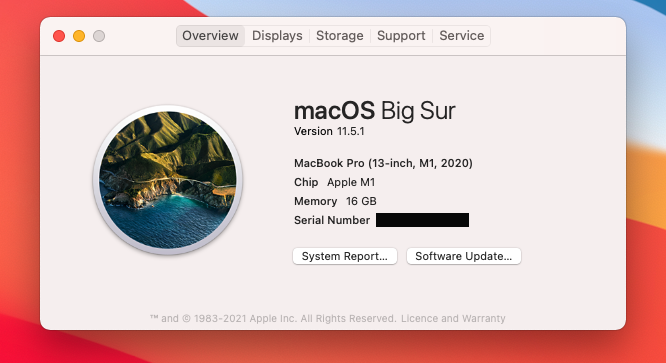 Wouldn't life be easier if you had one package manager that could install it all?

Enter asdf. Mac and Linux variants are supported well. Sorry, Windows users but no windows support at this time. 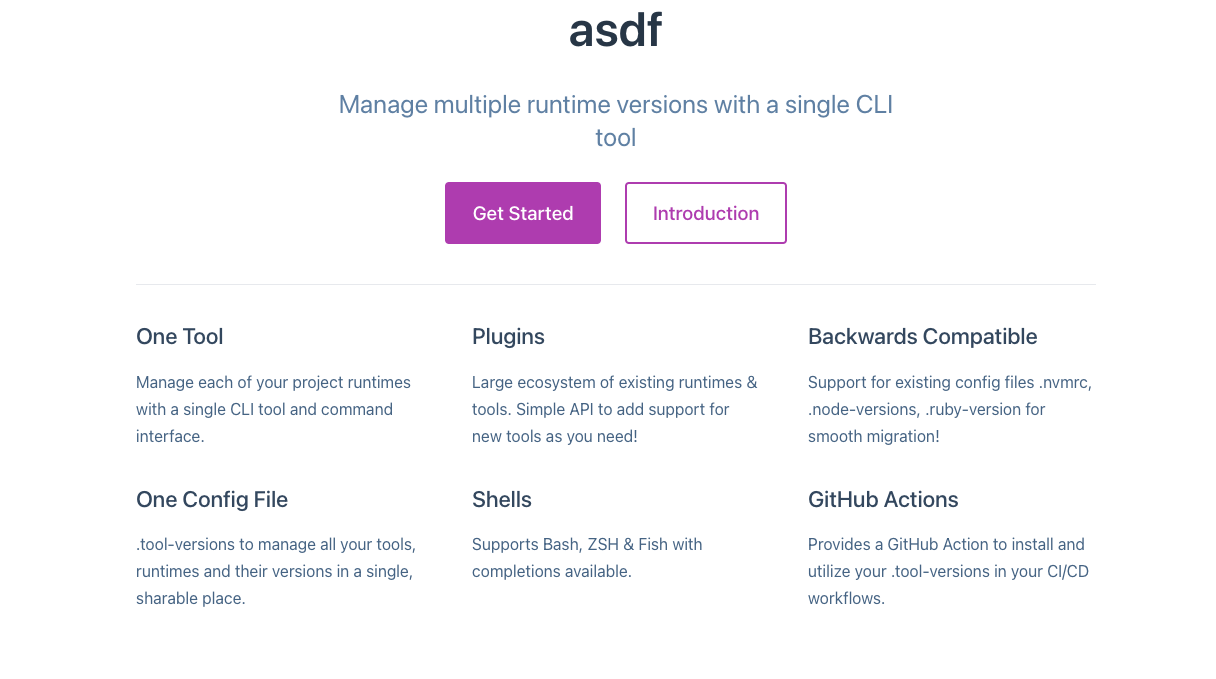 With asdf, you can do what they call a separate global and local setup for various languages and versions.

For example, a single directory with code on your machine that needs NodeJS v14, Elixir 1.10, and Erlang 23 can be set up using asdf to use those versions specifically in that repo. No more nvm use v14 and other package managers to use specific versions in that repo. When you switch into that directory, the version of NodeJS available will be whatever specific version you want it to be.

Having asdf up and running involves several steps. Once you do them a few times, you will have them down. It's not as complicated as it looks.

asdf needs gpg and gawk installed on the system. Since we are going to be using git in later steps, git needs to be installed as well. Individual programming languages, frameworks, libraries or tech might have their own dependencies. Don't worry about this until you reach that step.

We're going to use the git approach to install asdf simply because this way, you know what you're getting. Brew and other methods have been unreliable in my experience.

Run git clone from the command line or your git gui of choice. The below command will clone the repo as a hidden directory in your home directory.

Installing asdf is the one place where it gets tricky. Make sure to look over the official site for your specific setup. I will be going for Zsh and Git. 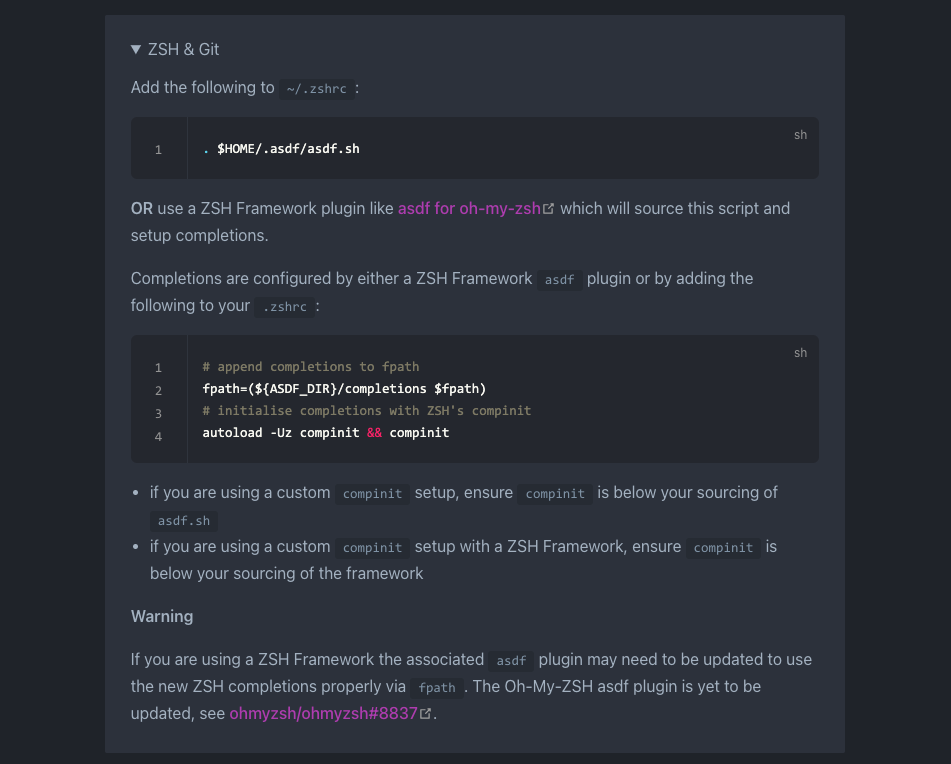 Find your specific set of circumstances on the official site for this step and follow them. It's as simple as that.

This should complete the installation for what is commonly referred to as the asdf core. All this means is that you have finished installing asdf and haven't yet installed any specific languages or frameworks.

Installing a plugin for each tool/runtime you wish to manage

Plugins here refer to either a programming language, framework, tech or database.

Running asdf plugin list all at the command line will list all available plugins for asdf. There are a lot so scroll or grep it to find what you are looking for.

So running asdf plugin list all | grep spark should return

To verify that it has been correctly added, run the below command.

You should see something similar to what's below. If you've added additional plugins, you should those as well.

Installing a specific version of the tool/runtime

Now that you've successfully installed asdf and added a plugin, it's time to actually install a binary or something runnable.

We're going to continue with our NodeJS example. The first step is to list out all available nodejs versions. If you have a specific version in mind then search for that version.

To search for all available versions of nodejs, run the below command.

To search for specific versions of nodejs, run the below command.

Finally, to install a specific version, run the below command.

Activate a specific version either as global or local install

Global simply means anywhere on your system. So say you are in a directory where you did not specify what version of nodejs should be used, the global version will be the one that runs.

To set the installed version of nodejs globally, run what's below.

Local simply means a specific directory. So say you git cloned a repo and want that only a specific version of node is used in that directory, you'd run what's below.

Typing nodejs -v should now give you that familiar output.

Congratulations! You now have a working setup of asdf and are free to not have to switch between a 100 language specific package managers for a single project.

TLDR: This is NOT financial advice.

The material on this website is provided for informational purposes only and does not constitute an offer to sell, a solicitation to buy, or a recommendation or endorsement for any security or strategy, nor does it constitute an offer to provide investment advisory services by Servingniches or me. In addition, the material offers no opinion with respect to the suitability of any security or specific investment. No information contained herein should be regarded as a suggestion to engage in or refrain from any investment-related course of action as none of Servingniches nor any of its affiliates is undertaking to provide investment advice, act as an adviser to any plan or entity subject to the Employee Retirement Income Security Act of 1974, as amended, individual retirement account or individual retirement annuity, or give advice in a fiduciary capacity with respect to the materials presented herein. If you are an individual retirement or other investor, contact your financial advisor or other fiduciary unrelated to Servingniches about whether any given investment idea, strategy, product or service described herein may be appropriate for your circumstances. All investments involve risk, including loss of principal. Servingniches makes no guarantees as to the accuracy or completeness of the views expressed in the website. The views are subject to change, and may have become unreliable for various reasons, including changes in market conditions or economic circumstances.

So the project that we're looking to install or use as an example for this is Wolfbot. You can find it at https://github.com/Ekliptor/WolfBot .

Feel free to install a repo or project closer to your heart. You will have to modify the asdf plugin steps to match your language or tech of choice but it will be similar and not too painful. If you're dealing with a relatively major programming language, then you will be fine. Otherwise, write your own plugin to support it in asdf. It's relatively easy and you get brownie points for it. I'd say go for it.

Wolfbot is a cryptocurrency trading bot.

Since we've discussed the steps in detail previously, I've left out verbose explanations.

To get Wolfbot up and running, we will need. Copy pasted from https://github.com/Ekliptor/WolfBot

Add in your mongodb url in the mongo url section of the file.

Final steps to run everything installed so far.

You will additional configuration like api keys for various exchanges to get the bot running fully but the above was meant to get the bot in a runnable state.